Border Patrol with Robotic Dogs in the US 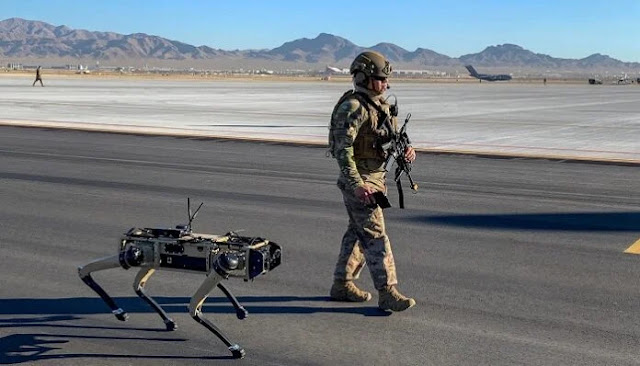 As if it were a science fiction movie, the US government has begun to patrol its borders with robotic dogs capable of detecting intruders and reporting detailed and accurate information to officials in the area, so that they can take the necessary measures. relevant.

This represents a before and after in the use of this type of technology for these purposes. If you are interested in knowing more, continue reading the following article, where we tell you the details.

Robotic dogs are here to stay

This is not the first time that robotic dogs have been used for a specific function, since they have been used to make home deliveries and even in the military sector; and now is when the United States Department of Homeland Security has provided details on how they will use them to patrol their borders. And although it is not yet official, the results have been favorable and it will most likely begin to be put into operation.

These robots are part of the Ghost Robotics company and bear the name of Ghost Vision 60, with quite peculiar characteristics; with up to 76 centimeters high, a weight of 32 kilograms and a speed of up to 12 kilometers every three hours on a single charge. Something that although it does not seem like the ones in the movies, it can be helpful for difficult terrain, where many cannot access or patrol easily; which will be a great advantage for the officers.

What functions do these patrol dogs bring?

In addition to the aforementioned capabilities, the Ghost Vision 60 can navigate autonomously or manually, depending on the desired circumstances. They also have thermal and night vision cameras for all types of environments; In this way, it is intended to establish the best quality so that the robot dogs can operate in optimal conditions and can give the best results in field tests.

These robots have been tested under many scenarios, with what was intended to test the responses to different variables, such as the inspection of abandoned cars and buildings and before a possible hostile attack; where he could defend himself in some way. In such a way as to pose a threat to potential intruders but without the use of deadly force or the use of weapons to do so; so they contain the best current security methods.

Like all new technology, these robots show certain limitations and disadvantages, these range from erratic behavior to system malfunctions that can cause them to stop working. As well as limited battery usage inside, this means they appear to be more of a prototype than a fully functional product; which will give the Department of Homeland Security a lot to think about in its use.

Similarly, they ensure that the dogs will not have weapons on them to avoid accidents, due to the lack of confidence they present at the moment. However, these robots are capable of carrying weapons, adaptations have already been made to these same models in the past, but this is not intended for border patrols; they will only serve for analysis and patrolling of areas of difficult access. ( Read also: This new TV would allow you to feel flavors through your screen )

The practical use of robotic dogs

Already in the past, robot dogs and intelligent drones have been used in the army, which have helped to carry out reconnaissance effectively and safely, since by being able to implement weapons, it means that the lives of the military can be safeguarded, this has done a tremendous change in this aspect; and for this reason, they have had a practical use in this sector for many years. Which makes the trust and expectations in this technology quite high.

Another example of its use in other sectors is that of sending packages in an intelligent way, allowing to improve the transfer of merchandise in a safe and monitored way to homes and companies without the need to use human personnel. For this reason, it is believed that the use of robot dogs at the border in the way that is planned; It will help improve the work of border patrol officers and make everything much more efficient.

There are many people who believe that this type of technology will only make society worse, since it will put many people out of work and the fear of an artificial intelligence uprising is still latent as it has been shown in many movies; which although irrational is a latent fear in many people. However, the most optimistic indicate that this will be one more step towards a bright and automated future where tasks that previously required effort are carried out truthfully and efficiently.